I bought a Quad QSA-30A pick and place machine in August, 2020 from an auction in Austin, TX. It was the best-looking of the P&P machines there, some were obviously missing parts. I had a heck of a time getting it inside, it was about one inch wider than my double door frame. But, due to the "H" shape of the machine, it was possble to angle it in one arm of the H at a time. When I got it in, it powered up just fine. But, after a few days, the servos would not power up, some kind of interlock issue was preventing it. Without any diagnostic flowcharts, I had to trace tons of wiring and finally came to the conclusion it was a bad VME board. Since this QSA-30 is very similar to the Samsung CP30 except for the feeders, I was able to get a replacement board from Korea. That debacle cost me a month. Then, the teach/fiducial camera started going haywire, and I had to replace that. There were some other issues with things going wrong, but reseating a bunch of socketed micorcontrollers seemed to clear all those up. One of the first things I did was to clone the hard drive onto a new (old stock) IDE drive. Then, I had to obtain feeders and more nozzles, and a vibratory feeder (so I could use parts in tubes and my custom feeder lanes for odd-sized parts). Then, I made a waffle tray stand. One of the heads had been seriously mucked up (swapped from a different machine that used different rotation motors and fouled up the ball spline. I got the right motor from China, and tried to fix the ball spline, but eventually had to replace the entire head. Well, finally, the hardware was all working, then I had to learn the software. Many things on the machine were QUITE odd and the manual is actually TERRIBLE to an extreme degree. For instance, the manual does NOT tell you how the coordinate system works! I had to figure that out by trial and error! Plus Y is up, but plus X is LEFT, not right as you would expect. (On my old Philips, it was perfectly happy with negative coordinates, so you could put the zero at the right, and then -X would be left of that. On the Quad, all coordinates must be positive. Also, rotations must be positive, so the two quarter turns are 90 and 270, where the Philips machine would do 90 and -90. Well, once you KNOW how they want it, it is no problem, but the manual SHOULD tell you all this! Then, one last thing, when I was placing the second board type, I was having difficulties getting it to recognize fiducials. Funny, it was "touchy" on the first board, but I got it to work. But, on the 2nd board type, it just WOULD not detect the fiducial. I pulled out the two affected VME boards and examined them closely. There is an A/D - D/A board that interfaces to the camera(s), and a DSP board with a TI 320xxx DSP chip. I found SEVEN unsoldered pins on one of the FPGAs on the DSP board, and resoldered them. Suddenly, the fiducial recognition was working fantastically! There is an "optimizer" program that uses knowledge of travel distance and other times to figure out the optimum sequence for picking and placing all parts, but it appears to scramble the part placement fields, like a spreadsheet where you sort rows but it doesn't bring all columns along with the column that it is sorting on. I'm suspecting "bit rot" and will see if I can get a copy of known-good software.

The P&P machine installed and ready to run. 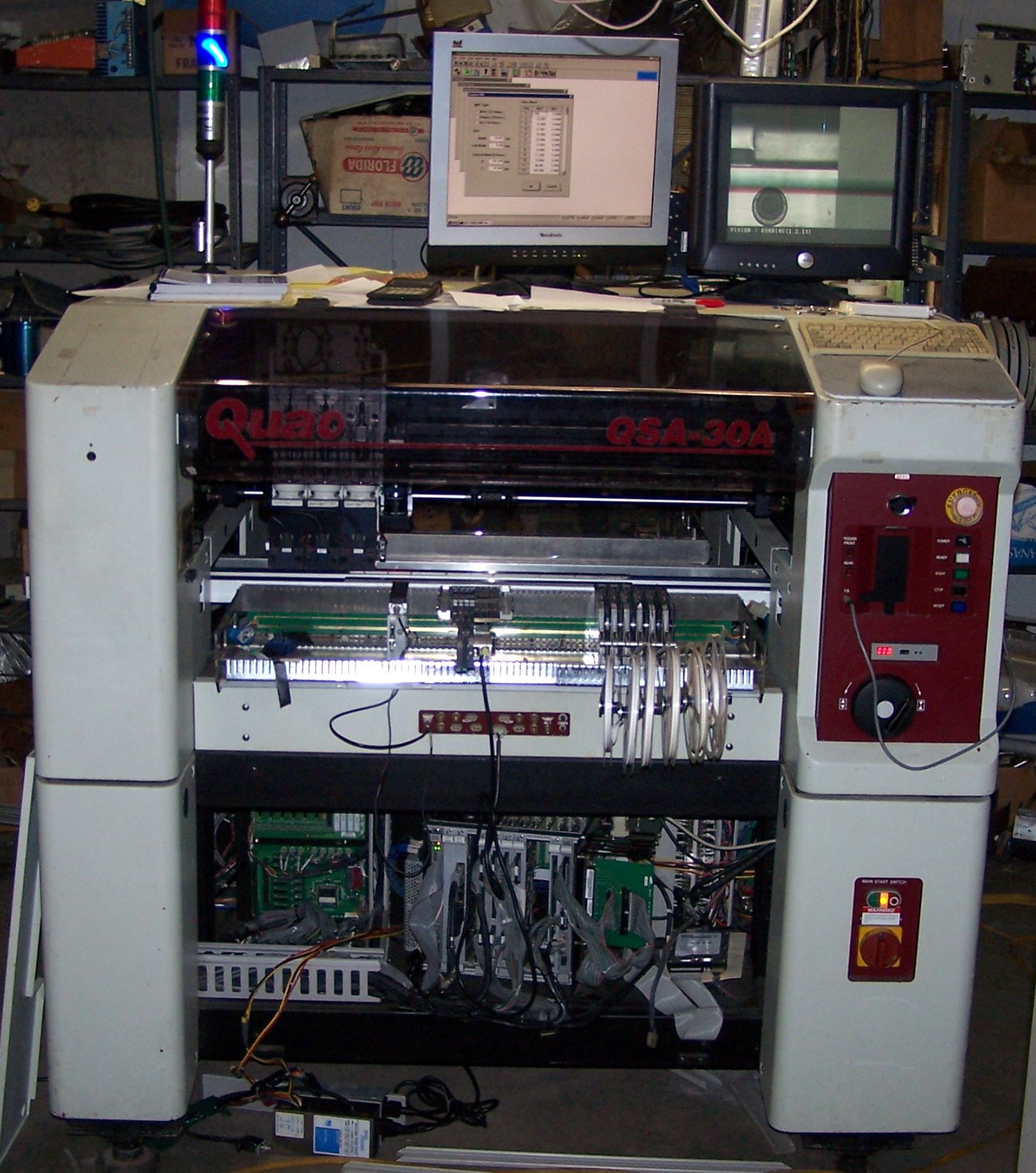 Here's a detail of the placement head. Vacuum filters are at the top, then the home sensor wheels for the Z servo motors. Below that is a swivel coupling and the top bearing for the Z rods. The round white thing contains the lower rotation bearing and a ball spline for the Z rod. below that is the rotation motor, and below that are the very dark vision cameras for component alignment. 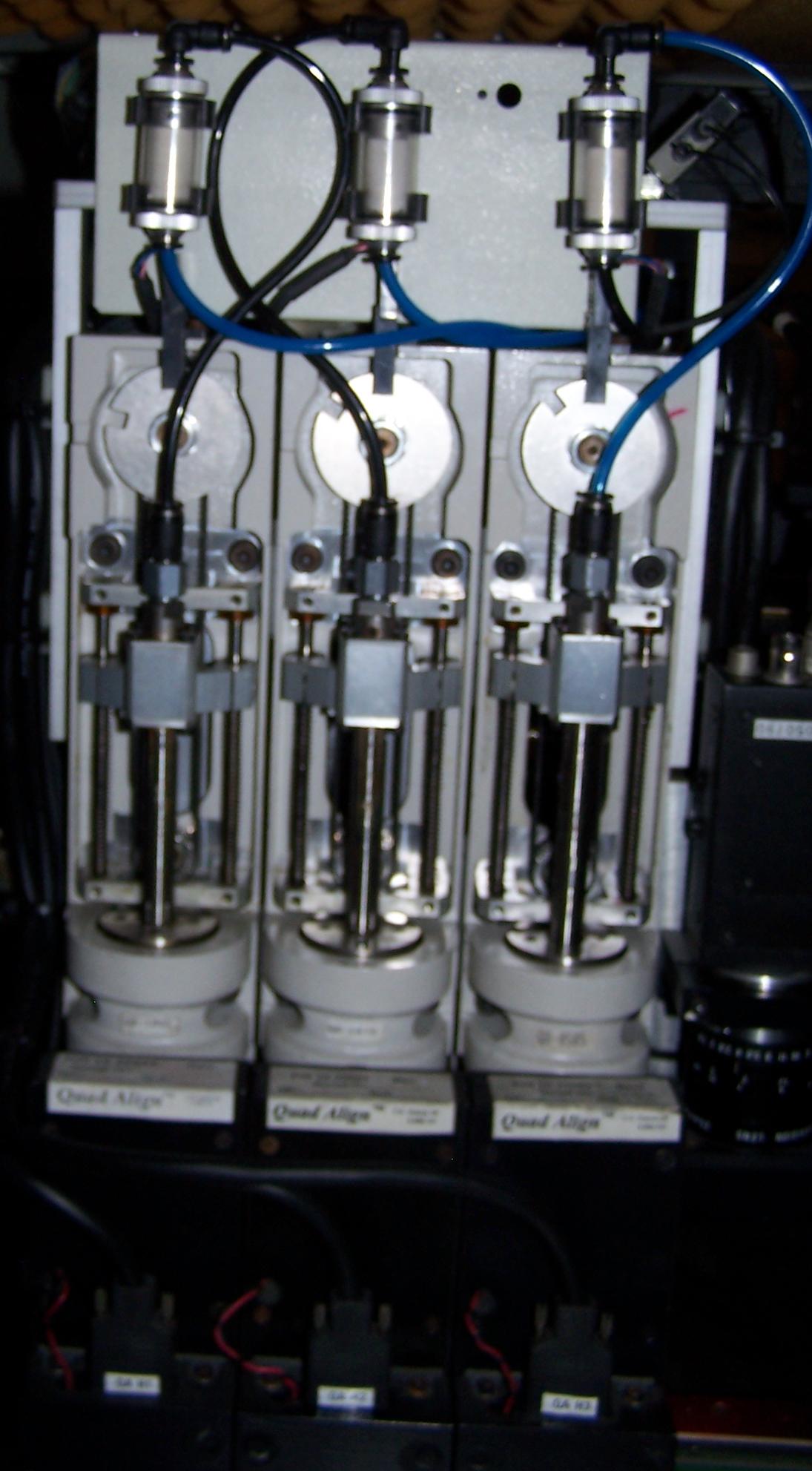 This machine has 3 nozzles with a line scan vision camera for each that aligns and centers the parts on the nozzles on the fly while moving from the feeders to the board. There is also a downward-looking camera for fiducial pickup and teaching pickup location for vibratory feeder and waffle trays. It uses Quad electronic feeders. It has separate rotation and Z motors for each nozzle. The software runs on Win95, the main motion control computer is a Motorola 68040 on a VME board, and all the vision processors (4) are TI 320xxx series. There are also a bunch of single-chip micros that run various interface boards. I replaced the 3.5" floppy drive with a USB floppy emulator to load and backup programs.